As part of National Apprenticeship Week we are telling the stories of some of our newest officers, all of whom joined as degree apprentices on our student officer programme.

PC Gareth Glass joined early last year, just before we entered a year of restrictions as a result of Covid 19. The 31-year-old, who is from Shropshire, previously worked in retail but decided it was time to switch store management for policing and a new challenge.

A year into his training, Gareth tells us about his typical day as a student officer based on a Response team in Wolverhampton. 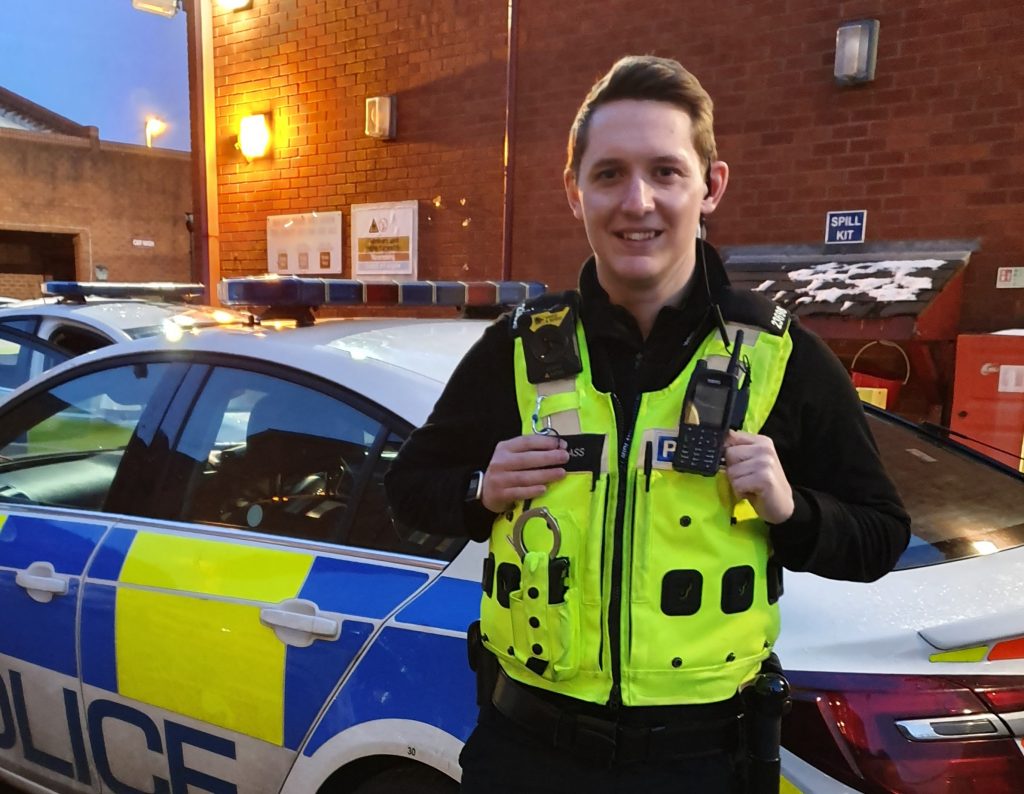 The day started with – kitting up and a briefing, beyond that you never know! That’s the great thing about policing, you never know what is coming next.

I’m responsible for – all sorts of things! In my current role as a response officer you are the first port of call in an emergency and as such you deal with a wide variety of incidents. It can be fast paced and challenging, but it’s also extremely enjoyable!

I joined up – in 2020 after a long time thinking about it. I had always fancied joining the police, I used to love the idea of being a detective. Solving crimes and protecting people is both mentally stimulating and incredibly rewarding! At the age of 30, in truth, I thought the opportunity of joining had passed me by, but I now realise it’s never too late – people join from a variety of backgrounds and everyone brings their own skillset to the police. I joined determined to make up for lost time and throw myself into the job! I’ve been incredibly lucky to have had some fantastic tutors during my training phase who allowed me to get out and experience what policing is about, and I’ve been part of some brilliant teams. My advice would be if you are thinking about applying, just go for it, you won’t regret it!

The department is – busy! I am currently based on Response Team D out of Wolverhampton Police Station. It’s a great place to work, full of great people and the supervision are brilliant. There is always someone to turn to for advice if you ever get stuck.

I got here – after working in retail for 12 years, with six of those in various management roles. I was at a point where I felt I needed a change. I decided to apply through the website for the PCDA degree apprenticeship programme. I passed all the assessments and background checks, and eventually my start date came through! I wasn’t sure how I would get on with the degree side, having been out of full time education for quite some time, but there is plenty of support from the tutors available if you need it. I have been surprised how quickly I have adapted to it.

My typical day – is hard to describe! It sounds such a cliché but there is no such thing as a typical day! Policing is so varied, which is one of the things I love about it. I genuinely come into work not knowing what I will be facing that day. I could be dealing with a shop theft one day, helping someone having a mental health crisis the next, or dealing with a domestic incident. You are always being challenged, which I personally think is great, no two jobs are the same! You rotate every 15 weeks as part of the PCDA programme too so you get to gain loads of experience on the different areas of policing such as FCID, Neighbourhood and of course Force Response.

The worst part of the job – is seeing the challenges we face from some people. We deal with some of the most unsavoury, violent members of society from time to time. Seeing colleagues assaulted is always difficult, indeed I have been assaulted myself which brings home how seriously this job needs to be taken.

The best part of the job – is knowing that you are doing your bit to try and help make our communities a safer place – that is why I joined. Knowing that you have taken a criminal off the streets, or helped safeguard a vulnerable person is extremely rewarding. Putting hours into investigating a job and eventually getting a breakthrough is probably the part of the job I enjoy the most. It can be difficult during the process but the sense of satisfaction you get is immense, especially when it leads to a conviction. I am hoping to get into the more complex areas of investigation longer term and become a detective.

If you’d like to follow in Gareth’s footsteps, take a look at our PC Recruitment pages for more information: https://jobs.west-midlands.police.uk/police-officer-recruitment/