Being an apprentice opens doors and many of our apprentices secure permanent jobs in their chosen careers after finishing their training.

Sophie Harris is one of them. She joined us in 2017 as a Forensic Assistant Apprentice, working in our Fingerprint Development Lab. 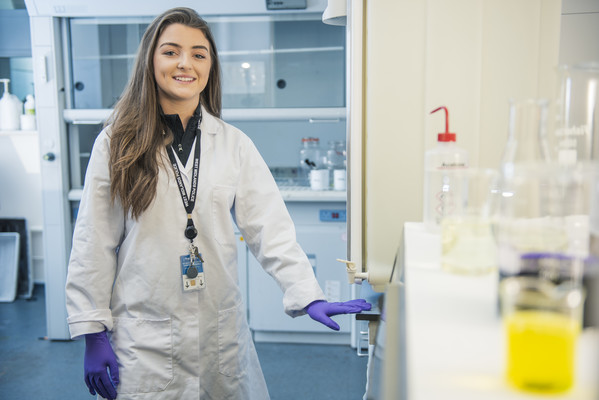 During her time as an apprentice she learned her trade, supported hundreds of investigations and was even one of the faces of the national Fire It Up apprenticeships campaign in 2019.

Since finishing her apprenticeship, she moved up to become a Forensic Technician, still in our lab, and has recently gained permanent employment as a Forensic Investigation Resource and Submissions Team (FIRST) Officer. She is still loving the fact that she’s in her dream career.

Sophie reflects on life as an apprentice as she discusses what her days, learning her trade, looked like.

The day started with…me waking up at 5.30am, getting ready and having a bit of breakfast before leaving the house. I drive from South Staffordshire to Birmingham to get to work ready for my shift at 7am. Back when I was still studying, I would get Mondays as a college day so I’d get a lie in on a Monday before getting the train to Sutton Coldfield ready to start college for 9.30am.

I’m responsible for…a number of different processes and procedures in the lab. As an apprentice I was based in the Fingerprint Development Lab (FDL) but also working across other departments, which include the Fingerprint Bureau, Footwear Unit and Major Crime Lab. In FDL I carried out chemical treatments on exhibits that were submitted to enhance/develop any latent fingerprints/plantar marks that may be on the items. I have since been successful in gaining employment within WMP, initially in a temporary contract as a Forensic Technician, however more recently I have successfully gained a permanent contract as a FIRST Officer which I am due to start this month.

I joined up…in November 2017 as apprentice. My interest in forensics started as a result of my home sadly being burgled when I was 10 years old. A Forensic Scene Investigator attended my house and from the moment he arrived I followed him around like a puppy, and he was so helpful, telling me what he was doing the whole time. I did find it very difficult to gain any sort of experience due to nature of the industry being so confidential, so finding this apprenticeship was an opportunity that I couldn’t pass.

The department is…such a supportive place to work. Since joining, I have had the opportunity to go on many attachments to almost all areas of forensics, including attending scenes as part of my CPD which gave me plenty of experience for when it came to applying for jobs at the end of my apprenticeship. Everyone in the lab is very friendly and they were always willing to offer help and constant support both in work and with my college studies.

I got here…through applying for an apprenticeship that I saw advertised on the GOV.UK website. I was one of three chosen out of 2,500 applicants to become an apprentice for WMP, which is something I am very proud of. I completed an online application, followed by a telephone interview and then a face-to-face interview. I was so happy when I found out I had been successful and couldn’t wait to start.

My typical day…saw me arrive at work where I would catch up with my emails and check the rota to see what duties I’m assigned to that day. Depending on what duty I was down to carry out, I planned my day to ensure I got everything done in time, before the end of my shift. Although the procedures and treatments carried out in the lab are the same, there was never a ‘typical’ day, as I moved around departments most days, helping pick up as many skills as possible.

The worst part of the job…is nothing, I enjoyed every aspect of my job. There were sometimes elements of the job that were less enjoyable, such as when workload increased and the environment becoming high pressured, however having such a supportive and helpful team around me, allowed me to enjoy each day as much as possible. I was offered such an amazing opportunity through this apprenticeship scheme and I continue to enjoy the new role I have been given.

The best part of the job…is being able to work in an environment I have been interested in for so long. Being able to enter the world of forensics without doing a degree has been such a good opportunity for me, especially as I’m definitely better at learning on the job!

If I didn’t do this I’d…probably have tried to get an apprenticeship in another area of science.