Today’s article with Sergeant Bushra Zarif is certainly inspiring. The busy 46-year-old mother of six definitely proves that you can have it all, a rewarding career and a family. 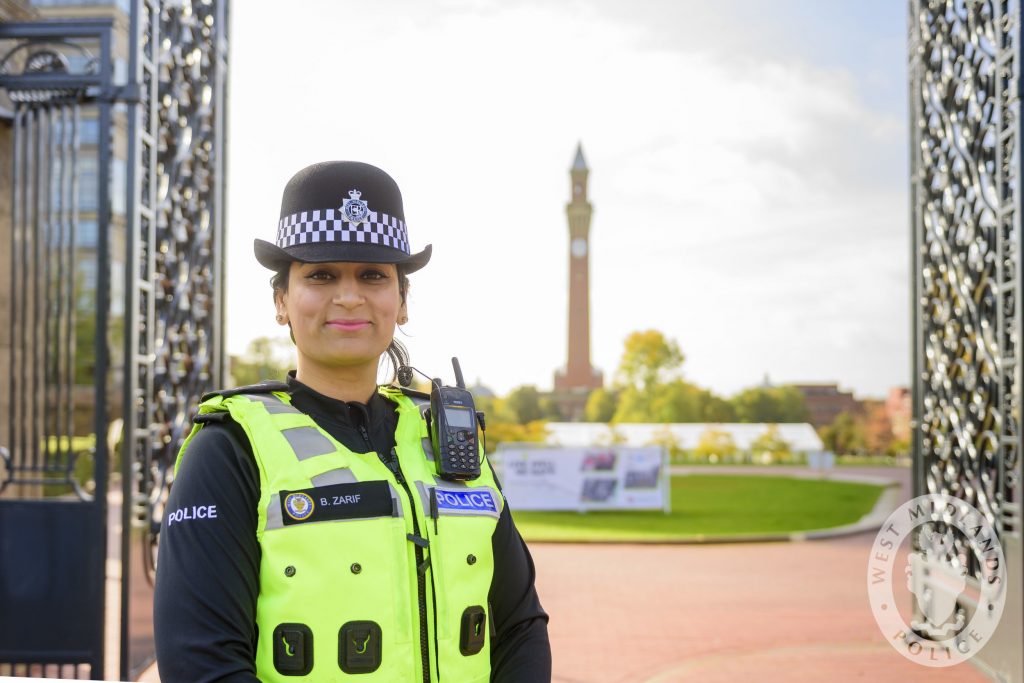 The day starts with… getting six children ready and off to three different schools, before making my way into work. My husband works as a chief inspector in Birmingham East and tends to leave before me, leaving me to do the school run and prepare the packed lunches.

I’m responsible for… the University of Birmingham campus (UOB). The UOB has always had an officer on campus, however, it has recently funded two full time PCSOs and I am responsible for this small team. Our role is to promote student safety and prevent crime on the campus. We link in with the security team and promote crime prevention among the students as well as working with the established support networks and groups, including the Student Guild.

I joined up… in 1992. I have 27 years police service. I am a qualified detective and have worked within a number of roles and departments throughout my career. I was promoted to sergeant in 2016.

I have worked all over the West Midlands area including Wolverhampton, Walsall, Solihull and Birmingham. I have worked in the CID where I was responsible for investigating serious crime and I have also been on a robbery team. My fondest memories are from when I was in uniform as part of the response team in Willenhall, Walsall. I enjoyed rushing around with the blue lights on and delivering frontline policing.

I got here… I am very lucky, I have had a lot of support from my family and the organisation in order to maintain both my roles as a busy mum to six young children and being a police officer.

I always wanted to join the police, it was a childhood ambition, having been inspired by programmes such as ‘The Bill’ and ‘Cagney and Lacey’. I always wanted to do a role that was not office based and meant that I was out and about in the community.

I finished my ‘A’ levels and joined the police aged 19. It was my first and only job. I am one of the longest serving Muslim female officers in the West Midlands. When I first joined the police, I faced discrimination based on my race and gender, but I’m pleased to say the organisation has moved on from those days.

In terms of juggling family and work life, it’s hard work, but I am super organised and a minimalist, which means that things generally run smoothly.

My old English teacher Mrs Golden once told me there is a place for everything and everything has a place. She also told me to never put off tomorrow what you can do today. I pretty much work to these principals even now.

My typical day… there is no such thing as a typical day in the police, no two are ever the same. My current role involves being visible on the campus site and working closely with partners. I love being a sergeant as you are in a position to influence and lead how your team delivers policing.

My most memorable moment… my husband and I recently went to the Queen’s garden party at Buckingham Palace and we had a really lovely day. He was invited to attend by the Chief Constable Dave Thompson in way of recognition for his work with Street Watch – I was just his plus one!

We travelled down on the train, leaving the children at home with my sister, before going to the army barracks and changing into our police tunics and walking to the palace.

We managed to see the Queen and HRH Harry, as well as Princesses Beatrice and Eugenie. We video called the children from the Palace to make them feel included.

The worst part of the job… seeing the impact of violence and harm against the most vulnerable in society. I have seen at first hand the damage caused by drink driving, having attended the scene of a fatal road traffic collision.

The best part of the job… it’s a privilege to wear the uniform and be the ‘go to person’ when people are at their time of need. As a young officer, having only been in the role for 12 months, I helped to disarm a man with a gun, for which I received a Chief Constables’ Award for bravery.

If I didn’t do this I’d… I would probably be a midwife as I love babies – hence why I had six of my own!

Has Bushra’s story inspired you to consider following in her footsteps? Recruitment is now open for new police officers to join our family. As you can probably gather from Bushra’s story, being a police officer is more than just a job, it’s a rewarding and interesting career where you get to be part of a unique family.