The West Midlands is a vibrant region that is home to people from many different communities, of various faiths and cultures. Here at WMP, we want to reflect this across our many teams, covering this great part of the country.

This region is one of the most ethnically diverse areas in the UK, and in Europe. Birmingham is one of the youngest cities in Europe, with under 25-year-olds making up 40 per cent of the population. After the Metropolitan

Police, we police the most diverse region in England. And our diversity is not just about people’s heritage, the West Midlands is proud of its many communities. For example, we have strong links with the LGBTQ community and we play an active part in supporting events, such as Birmingham Pride, each year.

Here at WMP our black and minority ethnic representation is 13.1 per cent, and we are making great strides to attract more people from all communities who live across the West Midlands and the surrounding area. Recent application rates show 28 per cent of applications are from members of BAME communities and over 45 per cent are from women.

We have over 250 colleagues who identify as being a member of the LGBTQ community and are proudly part of UK policing. In addition we have over 600 LGBTQ allies across the force.

EnAble is one of the WMP support groups, which represents over 300 colleagues who have advised they either have a disability, physical or otherwise, or they care for someone who does. They all proudly serve West Midlands Police and its community. WMP is a Disability Confident Leader and provides required Reasonable Adjustments.

We are part of the Disabled Police Association, a national body representing all forces with disability issues at highest levels, and also have numerous contracts with national and local disability and carers charities and organisations.

In short, we welcome applications from all communities and underrepresented groups, regardless of race, sexual orientation, disability, faith, age and gender.

Our force Values include: “I want to work in a diverse team” and “I am courageous and fair”.

Every department in WMP has a diversity and inclusion plan so that we can improve our service based on a better understanding of the progressive, beautiful, complex and diverse communities we serve.

We are committed to providing the best possible service to our communities, ensuring everyone has fair access to all our services and treating everyone with respect at all times.  We aim to integrate equality and human rights into everything we do to deliver a service which meets the needs of our communities and supports our workforce.

Section 149 of the Equality Act 2010, introduced a Public Sector Equality Duty, which requires all public authorities, in the exercise of both its internal and external functions, to have due regard to the need to:

When reviewing or developing new policies, projects and working practices, Equality & Human Rights Assessments are carried out to ensure that people’s basic rights and the needs of diverse communities and individuals, especially those who may be the most disadvantaged or excluded in society, are consciously and properly considered.

This due regard will focus on the nine protected characteristics as defined by the Act relating to that of:

Positive action is about taking lawful actions to address any disproportionality in workforce representation. It can be used to target any protected characteristic. Typical positive actions include; targeted advertising campaigns to encourage candidate applications or development workshops to familiarise candidates with the recruitment process. It does not include offering someone a job based upon a specific protected characteristic as that is classed as positive discrimination, which is illegal.

What protected characteristics are disproportionately low in policing?

We look to increase diversity along all protected characteristics within West Midlands Police.

What are we doing and why?

Robert Peel’s Principles (1829) talk about ‘the police being the public and the public being the police’. These underpinning principles are intuitive to WMP as we serve one of the most diverse regions of the UK.

Having a diverse police service reinforces the principles of policing by consent.  The public need to be able to see and trust the police in that it will treat everyone, be it a colleague or a member of the public, openly, fairly, with dignity and respect. We hope this helps us to build bridges between West Midlands Police and groups who traditionally feel disconnected from us. Helping legitimise trust and confidence in the police.  This is increasingly important with  newer and emerging communities.

The WMP Positive Action team holds workshops aimed at dispelling common myths about policing, to give the candidates an insight of what to expect from the job, the recruitment process and help build their confidence.  We work with our candidates throughout the recruitment process and beyond, ensuring they receive any appropriate support, while embracing equality of opportunity.

Candidates we work with will still have to meet the same rigorous standards as everyone else and pass all parts of the process.

If you want to know more, have queries or would just like to discuss what policing is like, feel free to get in touch with the Positive Action team, by emailing: positive_action@west-midlands.pnn.police.uk

Is positive action legal?
Yes, of course. We are a police service and it is vital that we uphold the law. Positive action is endorsed by Sections 158 and 159 of Equality Act 2010.

How do you define what an underrepresented group is?
Through using data we have on our staff we can highlight where we have lower representation of a particular group within West Midlands Police compared to representation of that group in the general public. There is a great deal of this information available on the Home Office website .

Do you give answers to underrepresented groups?
No, definitely not. The support we provide is good but generic and is more about building confidence in the individual that they will be welcome to work for West Midlands Police. It would undermine our assessment process to give answers so we would never do that – irrespective of how under represented we may be.

Is it an advantage to be from an underrepresented group?
No. Whilst we proactively target underrepresented candidates to encourage them to apply to West Midlands Police and answer their questions, we will answer queries and encourage anyone, whoever they are, to get in touch if they need our support.

What additional support is there?

Officers on duty at Birmingham Pride

At WMP we believe in the power of peer to peer learning, as well as safe spaces to reflect and grow.

There’s a range of associations, networks and groups supporting our people and WMP has lots of initiatives and schemes to help colleagues develop.

We have a coaching and mentoring programme, our Aspire to Inspire workshops, a Leadership Promise and a range of supported continuous professional development opportunities through our Learning and Development department.

Our key staff networks offer crucial support and friendship to the WMP family and local communities alike. Our staff associations work to support and advise colleagues nationally too and we are proud of the active part they play in influencing policing across the UK. 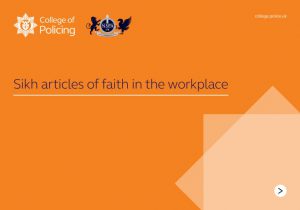 Our Sikh Association has worked hard to help create national guidance, with the College of Policing, regarding Sikh articles of faith in the workplace. To see more about this, click on the image to the right.

We are proud to have a number of support associations for colleagues and those who may one day become a colleague. These include:

The overall strategic aim of the association is “to encourage and enable the women of West Midlands Police to make their full contribution to policing”.  WMAWP gives members an opportunity to make their voice heard and regularly asks members for their input and feedback on various issues which affect women within the force.

The Black and Asian Police Association aims to improve the working environment of Black and Minority Ethnic staff with the view to enhance racial harmony and the quality of service to the Black community of the West Midlands. Overall, assisting the police service in delivering a fair and equitable service to all sections of the community.

The network is formed of a group of Christian West Midlands Police officers, staff and specials, who meet together on a regular basis.

Anyone is welcome to come along to any meeting or function regardless of denomination or faith background.

Within the umbrella of the WMP Christian Police Network (CPN), we also have the National Christian Police Association (CPA).  To find out more about the national CPA including membership, beliefs, and the history of the CPA, please have a look at their website http://www.cpauk.net/

The Network exists to support staff, build positive relations between WMP and the LGBT+ communities across the region and act as a single point of contact within the force for any LGBT+ issues.

The Association of Muslim Police aims to serve and add value to core policing by raising awareness of the threats and opportunities impacting on the force, helping to build links with vulnerable groups in communities and forming partnerships for positive change.

EnAble is a support group for ALL members of the police family, officers and staff who either suffer from a disability or are carers or just want to know more about disabilities and caring in the workplace. The group offers support to both individual employees and the organisation to ensure that our staff are treated fairly, compassionately, enabling them to achieve their full potential.

The Sikh Association describe themselves as being educators and community advocates within the force: “It’s not only educating officers but building that bridge between us and community. People can now be reassured that our officers will be sympathetic to people’s beliefs and know where they are coming from as a member of the Sikh community.”

The group seeks to advise WMP on faith and belief issues and make our staff feel comfortable about being open with their faith or belief at work. Meanwhile, the group aims to demonstrate to the public that West Midlands Police works for people of all religious faiths & beliefs and is a great place to work. Faith and belief includes people who hold no religious beliefs.

In addition, we have the WMP Force Chaplaincy and our Reservists and Veterans community plus groups such as the Vivat Force Choir, our Brass Band and the force’s sports & social club. There’s also our trade unions, including Unite and Unison for staff as well as the Police Federation  (The WM Police Federation Facebook site) for officers.

I’m proud to wear the uniform because this work matters…

Independent Advisory Groups (IAGs) are made up of volunteers from various backgrounds of the local community offering independent advice to the police on local/force policies, strategies, delivery plans and community concerns.

The IAG supports policing by offering: