The Police Race Action Plan released by National Police Chiefs’ Council (NPCC) and the College of Policing sets out the commitment of Chief Constables in England and Wales to become an anti-racist police service and to explain or reform race disparities.

The plan will now be subject to further independent scrutiny with the public, police officers and staff and experts invited to share their views before it is finalised in December 2022. 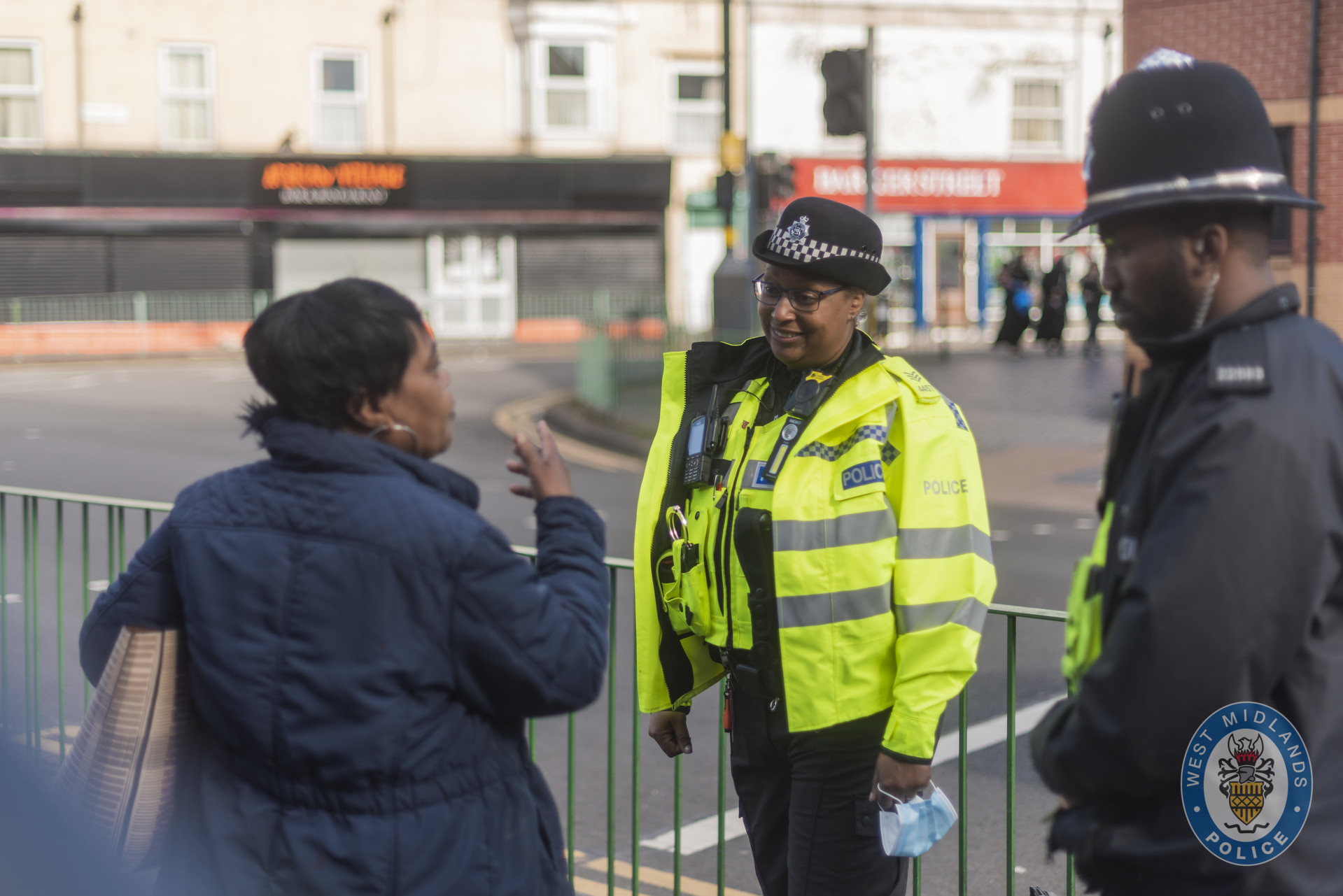 The plan aims to address the significantly lower levels of trust and confidence among some Black people and the race disparities affecting Black people that policing cannot currently fully explain.

It can be accessed here.

• Black people have significantly lower than average rates of confidence in their police force, 64 per cent compared with an average of 74 per cent. Among Black Caribbean people the rate is 54 per cent. This is echoed in the Government’s Inclusive Britain Report.

• Some of our powers, like stop and search and use of force, are disproportionately applied to black people. Latest national data shows that black people are almost nine times more likely to be stopped and searched than White people and the rate at which we used force was five times higher for people we perceived to be black.

• Policing lags behind almost every part of the public service as an employer of choice for black people. Just 1.3% of police officers are black, compared to 3.5% of the wider population and there have only been two Black officers who have reached the ranks of Chief Constable or Assistant Commissioner in policing’s history.

• The relationship between policing and Black communities has been damaged. The overt racism many of the Windrush generation experienced included policing. The Scarman report, following the 1981 riots across England’s major cities, identified the harmful impact of policing on Black Britain. Stephen Lawrence’s murder in London in 1993 and the 1998 Stephen Lawrence Inquiry by Sir William Macpherson were watershed moments in facing up to racism in policing. The IOPC Operation Hotton report shows the reality that racism still exists in policing.

Chief Constable, Sir Dave Thompson, Senior Responsible Officer for the Police Race Action Plan, said: “Much has been done by policing to address racism in the police and society. Policing is more inclusive, more diverse, and more reflective of our communities than we have ever been but equally
it still contains racism, discrimination, and bias.

“Clearly policing is not unique in this – racism and conscious or unconscious bias is a society-wide problem – but given our powers and essential role in society the standard for policing must be higher.

Have you say on the plan in the survey

“Saying that racism, discrimination, and bias still exist in policing – in behaviour but also in policies and practices that have a negative disproportionate impact on Black people – is not the same as characterising policing or all its officers and staff as racist.

“The majority of police officers and staff would assert they would not consciously tolerate racism. Racism is prohibited and repudiated in the rules and codes of practice that underpin policing. We need to go further and build an actively anti-racist police service that reflects and protects all communities.

“It’s important to say disparities are not necessarily a sign of discrimination and there may be a range of factors behind a disparity. But we do need to understand the causes, explain them, and reform them where there is not a justifiable reason for the disparity.”

The plan defines anti-racism in policing as tackling racial disparities proactively, accepting them as problems whatever their cause because of the impact they have on Black people.

The Independent Scrutiny and Oversight Board (ISOB), chaired by Barrister Abimbola Johnson, will have a critical role in scrutinising the plan and its delivery.

A survey launching today will enable anyone with expertise or an interest in the plan to share their views and shape the final plan.

Key actions as part of the plan:

• Increasing the awareness and understanding of every officer and member of staff of racism, anti-racism, Black history, and its connection to policing through introduction of a mandatory programme of training for all police officers and staff. This is in line with the government’s Inclusive Britain plan’s recommendations that police recruits have a better understanding of the areas and people they serve, become more representative of their
local communities, and benefit from local knowledge and experiences.

• Adopting an ‘explain or reform’ approach to race disparities and developing a new national approach to help forces tackle race disparities in their use of powers including traffic stops; stop and search, use of Taser and other types of force. This will be supported by strengthened governance and oversight of the use of police powers including effective supervision and community scrutiny of police data and body-worn video (BWV) footage of police interaction with Black people.

• Reducing racial disparities in misconduct and complaints processes and improving support to Black officers and staff. The NPCC will work with the APCC to review misconduct and disciplinary processes from initial assessment investigation and outcomes and implement changes.

• Trialling and testing methods for better enabling Black people to have their voices heard, raise concerns, work on solving problems in their community and provide feedback. Their input will then shape local action plans and they will be empowered to hold their police force to account on their delivery. We will also hear the voices of our Black and Black heritage officers and staff in a survey – the first of its kind, which will run for annually for the
next five years

• Increased action to address the criminal exploitation of young Black men, a group identified as being vulnerable to this form of exploitation, working to disrupt the cycle of victims becoming offenders and ensuring police action is appropriate to their age and exploitation is properly considered.

• Introducing a national standard across all recruitment and promotion processes to minimise race disparities. Building on the results of a new online assessment process, which has led to a significant improvement in the success rates of Black candidates (57.8%) compared to the previous, face-to-face assessment method (49.2%).

Chief Constable Andy Marsh QPM, CEO of the College of Policing said:“There is a moral and operational imperative to undertake this work. Racism or discrimination of any kind is deplorable, completely unacceptable and should have no place in society and no place in policing.

“This work is central to our crime-fighting mission. The British principle of policing by consent is built on trust and confidence of the public in the police.

“With that trust comes cooperation, dialogue and crucial sharing of information that is essential for us to tackle crime. That trust is far too low among
Black people, and we are less effective because of it. That is no longer sustainable.

“Building trust with Black people will mean better policing for all.

“Being anti-racist means it isn’t enough for an individual or organisation to not be racist. It means a commitment to taking action to challenge racial bias and prejudice where it is seen in practice, people, and policies.”

Abimbola Johnson, Chair of the Independent Scrutiny and Oversight Board (ISOB), said: “George Floyd’s murder may have caused an international reckoning with the police but the fact is that there are issues with policing and racism here too. The last few months alone have demonstrated this with a swathe of reports showing the unfortunate extent to which police have mistreated Black people.

“Something radical needs to be done to transform the relationship the police have with Black communities. Data shows that sadly every aspect of policing produces or at the very least replicates racial disparities and racism: arrest; handcuffing; stop and search; strip searching; use of taser; remands in custody; and charging to name just a few.

“When Black people are victims of criminality there have been unacceptable instances of them being let down and even actively harmed by the police who are meant to serve them. When Black people join the police, they fare worse than their White colleagues in terms of recruitment, disciplinary
action, retention, and promotion.

“My board will be working hard to push the police to deal with their problems head on. Policing cannot do that on their own, no one can solve a cultural issue without intervention. My Board and our Accountability Forum will ensure that the police do not ‘mark their own homework’; we will
ensure that the police listen to anti-racism organisations, local communities, and individuals.

“We will ensure that the Police works transparently when doing so. If we are not satisfied with the way the Programme responds to feedback, consultation and data, then we will say so.

“This interim plan needs thorough and trustworthy public engagement, which we will make it our duty to closely scrutinise and monitor.”

Inspector Andy George, President of the National Black Police Association (NBPA) said:“Racism and discrimination has blighted the hard work that the majority of police officers and staff do a daily basis to detect crime and prevent harm in society. The failure to deal effectively with racism in police systems and processes has allowed those who wish to bully and discriminate to operate in the knowledge that they are seldom held to account. This has been particularly visible in the last few years and demonstrates the need for long term and continuous action.

“The murder of George Floyd was a visual representation of the consequences of failing to tackle racism in all its forms. This action plan was the commitment from Chief Constables to tackle the lack of trust and confidence in our Black officers, staff, and communities.

“The NBPA have a unique role in developing long lasting relationships between the police service and the communities we come from, and we welcome the part we have played in helping to shape some of the actions in the plan. We hope this collaboration of lived experience and policing is continued as the plan is implemented at a local level.

“All Chief Constables have signed up to this action plan and the National Black Police Association will be working with the Independent Oversight and Scrutiny Board to ensure that real change is delivered in all police forces across England and Wales.

“The evidence-base and requirement for change has been long standing and now is the time for action to follow the words and sentiments from police leaders.”