I joined WMP in 2009 – it was my first real job. I’ve two younger brothers and wanted to be a good role model for them.

I’d always liked cop shows when I was growing up but I never really considered a career in the police. Then my friends started applying and I realised it was something that I could do too. 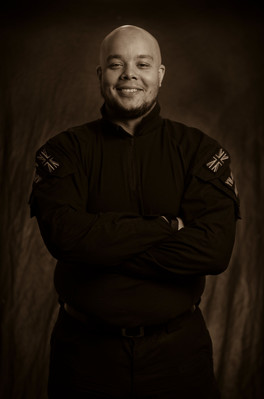 I started on Response at Queen’s Road and then moved to Newtown. I spent a year in investigations at Steelhouse Lane before riding in the neighbourhood taskforce van for Ladywood West. I swapped the van for a pushbike to patrol Bartley Green. Then I managed to pass my firearms assessment and I’ve been with the department for five years. It’s the best job in the force in my opinion. I get to do the best bits of the best jobs.

I did lose some friends when I joined the police but they clearly weren’t going to be friends for life. My family have always been supportive though. For obvious reasons they do worry about me, especially with being on the frontline.

I’ve had really positive experiences of support I’ve received from WMP. I’m a member of the Black and Asian Police Association (BAPA) and their support helped me through the promotion process to Sergeant, and then Inspector. They also supported me getting into the firearms department.

I’ve had an amazing career so far and would encourage others to sign up. I’ve done and seen things I’d never have had the chance to if I wasn’t a police officer.

As a force, representing our communities is important and so is building trust and confidence in what we do. I hope I’m playing a part in doing that.